So, You Want to Roll a Boulder Uphill? or Getting a Job in VC as an MBA Every year a number of MBA students reach out to me asking about getting a job in VC. I end up telling them all a similar set of ideas. I thought I’d try to answer this here so that I could save a bit of time. Skip this section if you just want advice.

Very briefly: I was involved in 3 start-ups, all of which were bought. I have a CS background and went from a penetration tester, someone who breaks into computers to test their security, to the tech lead for Symantec’s NY Office. This was in 2006 when I decided I wanted to go into VC.

To begin my journey, I met with David Strohm of Greylock to get input on how to get into the venture business. His advice, which I have heard countless times since, ‘Don’t bother, VC is a tough business.’ To his credit, he saw the upcoming shrinkage of the industry and tried to point me to PE, which was about to have a boom. Then he admitted to me that, if I couldn’t be swayed, it might be worth it to go to business school. I decided to do that, and 18 months later I was in school again.

In B-school, people commonly do internships during the summer between the first and second year of the program. Most people lock these up in the first quarter of the year, it is a rare and stressful case to be two weeks before the start of summer break without anything lined up. About a week before summer internships started, when all my classmates had internship offers and were partying, I finally got an offer for the summer from the firm US Venture Partners in Menlo Park. The team there taught me a ton, and I really owe them all a lot.

At the end of school I again was one once again one of the minority to not have a job offer in hand. I moved out to California, without a paying gig, to find work. The folks at US Venture Partners were nice enough to let me use an office while I looked. They had recently promoted two of their principals to partner and thus made it clear that they weren’t hiring so I would have to look elsewhere.

After doing consulting work for six months or so I took a job at Adobe, but I kept my eyes peeled for venture opportunities. After more than a year at Adobe I was introduced to the team at Gotham ventures for the first time. I met with them 4-5 times over the next 6 months before getting an offer. Total time to find a role in VC: 3-4 years.

Finding a job in venture is all about networking; I spoke to every alumni who was in VC.

The road to a job in venture is mostly likely to be one with many twists and turns. One really needs to be ready to wait and to be creative while trying to find that first job. Since every firm is different they will each be looking for different things, but some common refrains are:

Many people told me not to try to get a role in venture since it was so difficult to do; this made me want to prove them wrong. Instead, let me leave you with this: If there is anything else other than a job in VC that will make you happy, do that. It will be easier to get started and you won’t have as much headwind to fight.

A good friend of mine read a draft of this post and pointed out that nowhere did I say how much fun it is working in a startup. He is completely right. Before my switch I worked in several startups, and they were a blast. You’ll learn more in a year at a startup than in 5 years of b-school. Also, if you can make several million dollars at a startup then getting a job in venture will be easy; so I recommend doing that.

I’ll have my people talk to your people and set something up.

I’ve always wanted to say that. And recently a founder and I needed to find time to grab breakfast, so his person consulted my person and a meeting appeared on our calendars.

The wrinkle: we both have the same people.

Enter Super Calendar.  Part human, part software, all awesome for $80 a month.  They will schedule meetings according to your preferences and put them directly on your calendar.

Uber Conference is another service I’ve recently found that I can’t live without.  It makes scheduling conference calls a breeze, and the ability to see who is talking is a feature you didn’t know was necessary until you tried it.

Finally, I used my Fancy Hands team to take this handwritten blog post and transcribe it.  I like to write in my moleskin notebook since it prevents me from getting distracted by the web. 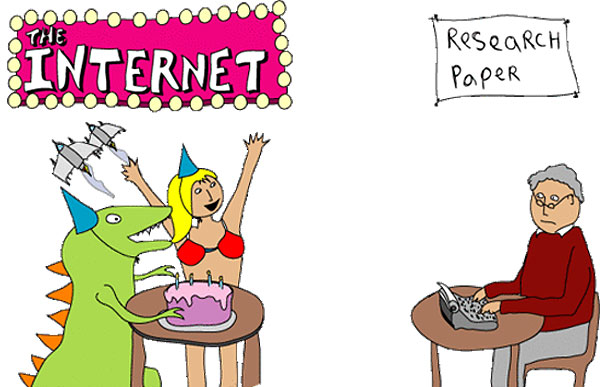 Fancy Hands makes this process as easy as typing my first draft, but without the distractions of web connectivity. They even found the comic above when I wrote: “<Insert comic about The Internet vs. Term Paper>”.

Crowd Funding: Angels, Not VCs, Will Get Disrupted

I wrote this before Angel List syndication was really being talked about. I’ve decided to post this and I’ll do a follow up on Angel List in a week or two, once I’ve had time to really think that through, but I still stand by what I’ve written below.

There has been a lot of discussion about how the crowd funding portion of the Jobs Act will affect the startup investment community.  As part of my Kauffman Fellowship project, I spent some time researching the subject and came to the following conclusions.

First, it bears noting that crowd fundable companies are a superset to Startups (see Paul Graham’s essay for a good definition of Startup).  Funding for businesses that don’t have the potential to scale will be done via crowd funding, not by historical startup investors.

My belief is that traditional VC may be disrupted some but that angels and micro VC’s will need to make larger changes.

Why don’t VC’s get disrupted as much as Angels?

Deal flow:  Crowd Funding and general solicitation will give founders the ability to access a wider pool of capital.  For traditional angels this gives them greater access to deal flow but also more competition.

VC’s are looking at companies full time and they generally don’t need more deal flow, thus this will have a much larger effect on angels.

Winning deals:  When a deal is hot and different forms of funding are competing for access, who will win?

If a founder wants only cash, then crowd funding may have the upper hand here, but this is rarely the case.  Most founders want things in addition to money:

While the crowd may theoretically be able to provide these functions, it would be in a very inefficient manner.  Soliciting advice from board members is a task, doing it from 75 angels would be a nightmare.

Follow on capital:  Savvy founders have already begun to worry about the “party round” where several angels or micro VC’s all invest a small amount.  The issue companies have run into is that no one is really invested enough to make the effort to ensure the company can raise further financing or lead a bridge in the case of a hiccup.  Better to have one or two investors who really care than ten who are simply interested.

Introductions:  Trying to figure out which of the 30 investors will give the best intro to a potential partner will be problematic.  Maybe a software platform can help with this, but if so I haven’t seen it yet.  If you happen to be developing one get in touch with me please.

Finally, many traditional venture firms have moved to B & C rounds.  When you need to deploy $600M it is much easier if you write big checks.  The industry is still in the process of a shake out, but those left standing will have more capital in the future if returns revert to the mean. (If they don’t then the whole ecosystem is going to have to change radically.)

For all of these reasons, I expect crowd funding to have a much larger effect on angel communities than on venture partnerships.  But either way, I’m looking forward to seeing it all play out.